A BEACH ON CASTRO STREET?

Well not exactly. The picture above shows the Hibernia Bank on the corner of Castro and 18th Streets on a Sunday afternoon. The bank plaza is the most spacious piece of sidewalk on our crowded street and, being on the east side of the street, it gets lots of sun in the afternoon. So it has become a natural gathering place. 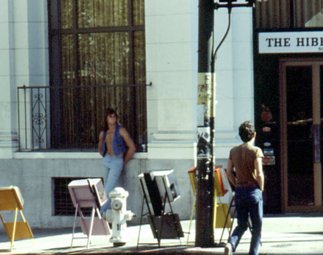 The day the above picture (actually a composite of three photographs) was taken, a group of exotic dancers were putting on an impromptu performance for the enjoyment of the crowd. On quieter days, if it is sunny enough, you’ll see a few shirtless sun-seekers soaking up some rays and perhaps seeking more than just sunshine. The bank plaza is the traditional location for the Castro Christmas Tree sponsored by the local merchants. At street fairs and similar events, the space is sometimes occupied by a temporary stage. 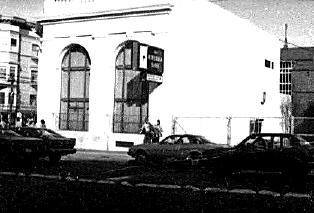 In the early seventies the Hibernia Bank consisted of just the white stone structure on the corner. The adjacent space was a parking lot and a drive-up window. As the Castro neighborhood grew in stature, the little business district prospered. Property values and rental prices soared. Mister Hibernia, in his infinite wisdom, tore down the parking lot and built a two-story office building in it’s place. The bank entrance on the corner was closed, the interior was remodeled, and patrons entered through the new structure.

In the early eighties the Hibernia Bank was bought out by Security Pacific Bank, but the plaza continued to be referred to as ‘Hibernia Beach’. In the late eighties the bank was acquired by Bank of America (which had a location one block away on the corner of Castro and Market). Today the space is still ‘Hibernia Beach’.