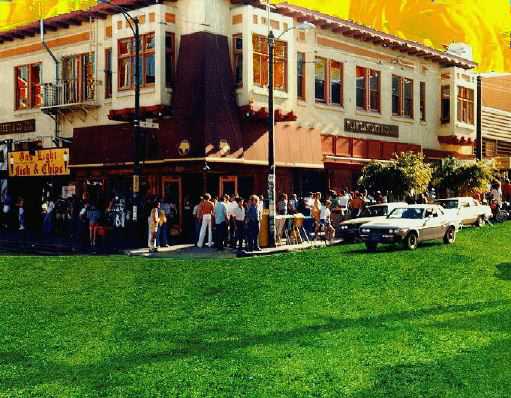 The Elephant Walk (after the Elizabeth Taylor Movie) was destined to play a role in local gay history. It was a mellow sit-down bar with picture windows looking out on the crossroads of the Gay World. Fred Rogers opened the bar in 1975 because, as he told me, he wanted a place with a view where he could go and sit and relax and have a good time with friends. I guess a lot of people wanted the same, because the place was always busy. Brunch was served till 3 PM Every Day! What more could anyone ask? All the employees were handsome and charming. The bar was refuge from the chilling summer fog that usually turns San Francisco’s summer into winter around 4 PM. There was no better place to stop and unwind on the way home from work. A hot Irish Coffee, a seat at the window, one eye on the steady parade of passing faces, and always someone to talk to.

SYLVESTER, the Castro’s very own rock star and Disco Diva, often performed at E-Walk on Sunday afternoons in the 1970’s. His backup singers were TWO TONS OF FUN who went on to become THE WEATHER GIRLS. Even after closing time the bar was a popular place to hang out. Every night from 2 AM until very late, a selection of hunks could be found leaning against the flower boxes that lined the windows along 18th Street. This cruising spot, one of many in the Castro, came to be known as the Meet Rack!

On May 21, 1979, the gay community rioted due to the light sentence given Dan White for murdering our leader Harvey Milk, and our Mayor George Moscone. In what came to be known as the WHITE NIGHT RIOT, City Hall was trashed and a dozen police cars were torched.

After the riot, Castro street was full of people relating stories, debating the issues, licking wounds. After Midnight dozens of police arrived. They had been humiliated earlier and were here to even the score. Acting without authorization, they gathered at Market and started pushing the crowd down toward 18th. We were in no mood to comply. Many of them weren’t wearing badges and nametags! They came to our neighborhood to get even. They formed a line and moved us half way down the block. It became evident to all, even to those who had stayed in the Castro and away from the riot; WE WERE AT WAR WITH THE POLICE! People came from every direction to join the resistance and we moved the invading forces right back up to the corner. They appeared to be leaving but they somehow regrouped at the corner of 18th and Castro. We stood and watched as they marched into the Elephant Walk, smashing windows, doors, tables, chairs, bottles, and peoples’ heads. Some victims needed to be hospitalized. These police were vicious. They were very unprofessional. They were out for blood.

The rioting police cost the City a fortune in Lawsuits and Investigations. The FBI even looked into it. We had no reason to apologize for our action (I personally just took pictures and observed). We had been pushed beyond our ability to swallow any more hatred and we did what we had to do.
But our Elephant Walk was in shambles!

The Elephant Walk quickly reopened and the good times continued. In June, 1985, Jack McCarty the E-Walk manager was returning with his lover, Victor Amburgy, from a vacation in Greece. They were on TWA Flight #847 which was hijacked and diverted to Beirut. Jack was instrumental in keeping the hostages spirits up by applying skills acquired as an volunteer SHANTI PROJECT AIDS counselor for terminally ill patients in San Francisco. He also taught them some meditation techniques. When they were released after 17 days detainment, and returned to the US with the other hostages , Jack and his lover bravely exited the plane with their arms around each other in front of President and Mrs. Reagan and network news cameras. When they returned to San Francisco, a reception was held for our two heroes on Castro Street. It was followed by a lively reception at the Elephant Walk where his friends carefully refrained from greeting him with “Hi Jack!”

In that same year, Fred Rogers planned to explore other adventures and he sold the bar to Michael Verdone, the owner of the popular B-STREET in San Mateo.

On December 2, 1988, an early morning Four-Alarm Fire consumed the upper floor of the building. The bar suffered extensive smoke and water damage and the building was closed for several years during the reconstruction.

In the fall of 1995, when the lease formally expired, Verdone was paying $13,000 per month in rent (more than twice the rent for any other bar in the neighborhood). Since he felt that he could no longer make a decent profit at that rate, Verdone closed the bar. and so the historic Elephant Walk ceased to exist.